How to Host an Outdoor Party and Remain Cool This Summer 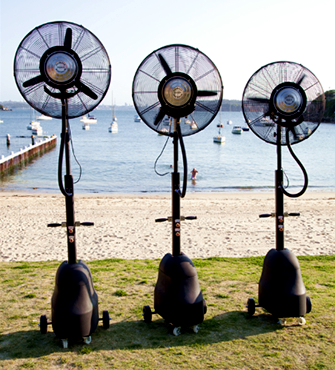 Christmas and holiday season is the time for entertaining. If you like to entertain then having the right type of home is a given. But there is still the heat to contend with. And no matter how suitable your home is for parties you still have to make the environment as comfortable as possible for your guests.

The days are long so you don’t want to be inside. For that reason your air conditioning is pretty much redundant. But there are some great ideas that work for hosting parties and it won’t cost you much to initiate them. Some of them are DIY ideas but we’ll get to those a bit later.

Outdoor misting systems in Australia are one of the greatest inventions for people who love outdoor hosting. Compared to an air conditioner they’re relatively inexpensive and they cool a large area very efficiently. In fact, they drop the temperature by as much as four degrees which is a significant change in air temperature. But the drop in temperature doesn’t necessarily reflect how pleasant a cool mist can be as it drifts over your body like a very fine on shore breeze.

Portable misting fans deliver a high pressure micro-mist delivered from the normal pressure provided by your hose through finely pierced misting nozzles. These miniscule drops of water evaporate in the heat which is what causes the temperature to drop. Misting systems have an excellent reach and they can have a substantial effect on large areas.

If you are looking for outdoor cooling solutions but you don’t wish to purchase a misting fan you could opt for misting fan hire !

Now for the DIY version of a misting fan. It’s not as efficient as the real thing and when you consider the energy output, it’s far less economical but if you are stuck and it’s sweltering, well we’d rather help to keep you cool than wag the finger and say we told you so.

Take a large baking dish or similar – come to think of it a wok might do the trick ! Make it as large as possible to reduce how often you need to replenish it. Place it in front of a fan and the breeze will pick up the cold water as it melts and disperse a cooling mist. You could use more than one fan depending on how many people you are entertaining.

As a caveat, you may wish to keep people from being directly in front of the fan because the droplets of water may be of an inconsistent size. But it’s a system that’s been handed down and it does have merit. You might want to test it first.

Another alternative is to create a cross breeze. That means if there is some breeze and it’s running north to south, position some fans diagonally so the breeze can run east to west as well. It circulates the breeze more effectively and stops people forming a cluster in one portion of your entertaining area.

But like everything in life, it’s all about the preparation and you get what you pay for. Climate Australia sell misting systems that are Australian safety standard accredited and they’re ideal for all indoor and outdoor areas. Don’t be fooled into buying cheap alternatives because that could be disastrous, especially if there’s a mishap when you’re hosting.