This unit sanitizes all solids, fabrics and the very air that we breathe

Please contact us for all shipping and delivery costs

Sanitises all solids, fabrics and the air we breath. Sanitises 99.98% Of all surfaces

Using an ozone generator, you can be sure of living in an environment that is health, without odours and is 99.98% sanitized without the use of any chemicals 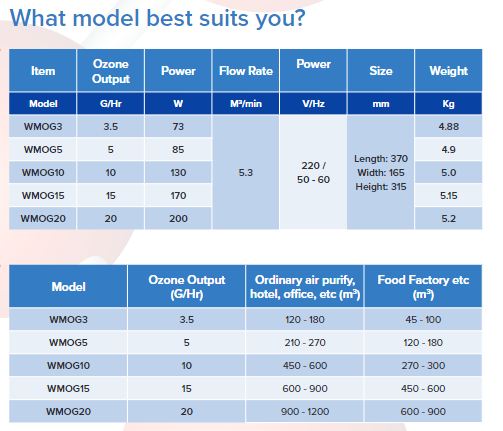 What is Ozone and how does it work?

Ozone generators intentionally produce the toxic gas ozone and are sold as air cleaners for commercial and residential applications. Specifically, they are advertised to deodorize, disinfect, kill, or remove dangerous or irritating airborne particles in indoor environments

How Long Does It Take for Ozone to Dissipate?

Ozone will last between 30 minutes to 2 hours for the third oxygen atom to breaks apart and reverts into oxygen. On a lower concentration level, it will typically take 30 minutes to 1-2 hours for ozone to breaks down into breathable oxygen.

It is a natural gas composed of three atoms of oxygen (O+O2=O3) which deactivates viruses, bacteria, mould and other microorganisms.

Ozone has been shown to kill SARS coronavirus

Why YES to the use of ozone in sanitization?

Because ozone is recognized by the Ministry of Health, with protocol 24482 of July 31, 1996, as a natural aid for the sterilization of environments contaminated by bacteria, viruses, spores, moulds and mites
Because it is recognized by WHO as the most efficient disinfectant for all types of microorganisms. In the WHO document to which we refer, it is detailed that, with ozone concentrations of 0.1-0.2 mg / Lmin, inactivation of all types of viruses is obtained.
Because ozone is a natural gas that sanitizes up to 99.98% of any type of surface
Because ozone is produced by professional machinery through oxygen and does not need consumables!
Because ozone does not pollute!• Because Ozone is a molecule made up of three oxygen atoms and once its oxidizing and sanitizing action is finished, it is converted back into oxygen, without leaving any residue.
Because professionally used ozone does not damage any surface!
» SARS ozone therapy – (source ziondaily.com )
» Disinfection with ozone of the areas subject to SARS – (source ozonetech.com )
» Ozone destroys the new Coronavirus – (source thailandmedical.news )
Ozone, a powerful weapon to fight COVID-19 – (source china.org.cn )
Indicazioni del Ministero della Salute – (fonte salute.gov.it)
Recognized by WHO as a powerful disinfectant – (fonte who.int)
CONCLUSIONS: The viricidal efficacy of ozone

But is ozone effective against COVID-19 coronavirus?

There are more than 17 scientific studies showing that ozone gas can destroy the SARS coronavirus. Ozone is a naturally occurring gas created by oxygen atoms. The oxygen molecule is made up of 2 oxygen atoms. These oxygen molecules are broken into atoms by the discharge of the crown during thunderstorms or by UV light from the sun. Individual oxygen atoms cannot exist on their own without reorganizing into di-atomic oxygen molecules. During this recombination phase some atoms will cluster in loose tri-atomic oxygen. This new molecule is called ozone or O3. Ozone generators can produce ozone from normal air and are normally used as disinfectant for the environment.
The pathogenic effects of ozone have been confirmed for several decades. Its killing action on bacteria, viruses, fungi and in many species of protozoa forms the basis for its growing use in the disinfection of municipal water resources in cities around the world. Typically, viruses are small independent particles, built with crystals and macromolecules. Unlike bacteria, they only multiply within the host cell. Ozone destroys viruses by spreading through the protein coating in the nucleus nucleic acid, causing damage to viral RNA. At higher concentrations, ozone destroys the capsid or the outer protein shell by oxidation. Numerous virus families including poliovirus I and 2, human rotavirus, Norwalk virus, parvoviruses and hepatitis A, B and non-A non-B are among others susceptible to virucide ozone actions.
Most research efforts on the viricidal effects of ozone have focused on ozone’s propensity to break down lipid moleculesin sites with multiple link configuration. In fact, once the lipid envelope of the virus is fragmented, its DNA or RNA nucleus cannot survive. They also started to study unwrapped viruses (Adenoviridae, Picornaviridae, ie poliovirus, Coxsachie, Echovirus, Rhinovirus, Hepatitis A and E, and Reoviridae (Rotavirus). Viruses that do not have an envelope are called “naked viruses”. They are consisting of a nucleic acid nucleus (made of DNA or RNA) and a nucleic acid coating, or capsid, made of proteins. Ozone, however, apart from its well-known action on unsaturated lipids, can also interact with certain proteins and their constituents, namely amino acids. In fact, when ozone encounters capsid proteins, protein hydroxides and protein hydroxides and protein hydroxides are formed. Viruses have no protection against oxidative stress. Wrapped viruses are generally more sensitive to physicochemical challenges than naked virions. Although the effects of ozone on unsaturated lipids are one of its best documented biochemical actions, ozone is known to interact with proteins, carbohydrates, and nucleic acids. The new coronavirus is a virus wrapped …